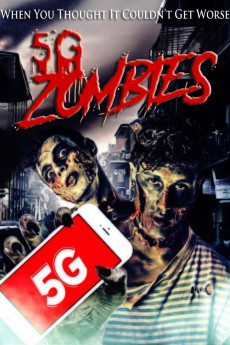 The new indie horror film 5G Zombies (actual title) was downvoted to oblivion by IMDb users, most of them probably in agreement that a film humoring unsubstantiated conspiracy theories isn’t among the things we need right now. According to some other reviews on the site, these voters have been outsmarted. You see, this movie is actually a joke; a spoof of the latest thing that unqualified morons have “figured out” about the global health crisis.Regardless, this is still a poorly made film. Its budgetary constraints are obvious, and I wouldn’t even say it stands many notches above Die Zombiejäger and Birdemic (I don’t think “budget” necessarily excuses poor effects, sound design, and editing these days; consider the astonishing sights Ian Hubert has brought to life with the free-to-download Blender software). I’m rating it generously for some of its gags.But there is another problem. I’m too familiar with conspiracy theorist logic to discount this movie as simply a joke at their expense, as it is very likely they will use it as ammunition.On one hand, they might not be smart enough to tell that it’s satirical, or even a dramatization. For all they know, this may be leaked footage of real people who were given COVID symptoms via 5G (a function of wireless Internet I wasn’t aware of), only to get “vaccinated” with tracking chips that then zombified them as per the schemes of Bill Gates, WHO, et al. NOTE: The theory is a hodge-podge understanding of three separate things; the idea for a temporary invisible-ink tattoo that lets doctors more easily confirm who’s already vaccinated, plus the idea of a website that keeps a record of tested COVID carriers, and lastly some Twitter video where the chip from a credit card (or something equivalent) was placed in a man’s wrist to buy vending machine snacks. Look, everyone already agrees that Black Mirror has become a documentary; you don’t need to add a bunch of unrealistic storylines to our real-world Skynet scenario with your Illuminati dross, especially when nit-picking ruins it.On the other hand, even if these idiots grasp the purported joke, I know what parodying conspiracy theories usually results in. Recall that True Facts and Conspiracies with Stephen Dawking sorta has that premise. They react to parodies of their maladroit beliefs the same way they react when someone explains what they’ve gotten wrong or left out of the equation – see the end of the previous paragraph.To them, stuff like this makes them even more right. Why would people laugh at my inane dot-connections if they weren’t true? Why would people try to refute me if I wasn’t on to something? Why would everyone dismiss me as a zombie alarmist if not out of fear for the truth; out of fear of losing their complacent illusion? Surely the fact that most data says I’m wrong, apart from this one “liberated” podcast and/or blog, is proof that the government is controlling all the sources? Surely debunking me is something only a shill for the establishment would do? (I got a taste of that last one when Mike Cernovich posted my review of Hoaxed on Twitter, mainly upsetting his already-certain followers – all he personally said was that he “didn’t care” that I’m not a fan, which is good on him, but hurting his feelings wasn’t the point of my scrutiny.)I won’t act like I’m a big fan of the ad populum fallacy; conspiracy theorists aren’t wrong “just because” their standpoints are unpopular. But accusing people of committing such a fallacy works better when it isn’t a question of facts being outweighed by other facts. That is, if the conspiracy theorist side even uses facts and doesn’t just insist on being deeply aware of some objective moral truth that no data can change, or simply uses the “our planet is flat because I can see what the horizon looks like” routine – perhaps even a cum-hoc involving the 5G masts being raised, suspiciously, right as the pandemic started out. Is there evidence of causation? No, but just look at the sense data, sheeple! Just use your eyes! And nothing else, please. Just burn some towers, dismiss the numbers as inflated (even as the opposite seems to be true in several countries), and then go outside without taking a shot. There, now you’re safe!To be clear, I don’t think that 5G Zombies shouldn’t be allowed to exist. It doesn’t poison the youth with the wrong ideas the way a Fifty Shades film might. It’s not strictly this movie’s fault that conspiracy theorists take what they can get – whether they take this as an endorsement or evidence of censorship. But then, maybe a better, less “ironic” film would have taught them something. As it stands, this is puh-retty bad.And this is assuming it’s a joke (the fact that the director has previously made a documentary about how aliens have “totally been here” makes me doubtful, but the Pentagon may actually help him out at the rate things are going). If not, it’s even more pathetic. If a Tree Falls