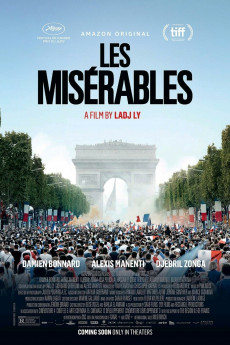 Brigadier Stéphane Ruiz is a young and light-heartened cop who moves to Paris to be closer of his little son after the divorce of his wife. Working in the impoverished suburb of Montfermeil, in the 93th district, where Victor Hugo wrote his famous 1862’s novel “The Miserables”, Ruiz joins the local Anti-Crime Brigade, being paired with veterans but unscrupulous colleagues Chris and Gwada, who are charged with the task to train Ruiz about the way Montfermeil’s works and the people to meet. However, his first day in Montfermeil twists in bad way when the owner of a circus and his men meet where drug-lord Le Maire (“The Mayor”) claiming for a stolen baby lion a few hours ago, blaming him by the theft. Avoiding a fight between Le Maire and circus’ owner, the three cops patrol the hood looking for the animal, learning that a troubled kid named Issa is the thief, who stolen to have it as pet. But when Ruiz, Chris and Gwada locate Issa to recover the baby lion, Issa’s friends attempt to …